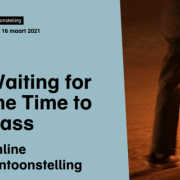 To celebrate Eye Filmmuseum’s 75th anniversary this year, we asked seven artists to provide a film work for an online exhibition. They are all artists with whom we have collaborated over the past ten years in the context of an exhibition. The films are as different as the artists themselves, but they are all situated at the interface between film and visual art, precisely the focus of our exhibition policy.

Francis Alÿs
Paradox of Praxis 5 (2013)
In many of his films Francis Alÿs performs seemingly futile tasks in public spaces. According to the artist, the poetical is political. Paradox of Praxis 5 is filmed in Ciudad Juárez, a Mexican city torn apart by violent drug cartels and a corrupt government.
Watch

Cao Guimarães
The Eyeland (1999)
In his early film The Eyeland, Brazilian artist Cao Guimarães demonstrated his ability to discover the casual poetry in everyday scenes. He was living in London at the time and in his images he not only observes the casual beauty of the city but also connects the timelessness of the moment to the underlying melancholy.
Watch

Janis Rafa
Waiting for the Time to Pass (2021)
A dog waits in a car. The windows fog up and we hear the creature panting and whining softly. Rafa connects this image with early Soviet space flights in which dogs were sent into space as part of experiments. Waiting for the Time to Pass is a new work, made during the corona pandemic, and the association with the limited freedom of movement and uncertainty is clear.
Watch

William Kentridge
City Deep (2020)
City Deep is the eleventh film from Drawings for Projection, a series of animation films that marked the international breakthrough of William Kentridge. He has been working on the series since 1989. This film is about so-called Zama zamas, illegal mineworkers who scour abandoned mines for remnants of gold.
Watch

Fiona Tan
Nellie (2013)
The short film Nellie was inspired by Cornelia van Rijn, the illegitimate daughter of Rembrandt. She emigrated at the age of 16 to Batavia and, as far as we know, she was never painted by her father. Fiona Tan has now finally given her a face. A central theme in her work is the exoticized Western view of the ‘Far East’, of the colonies.
Watch

Quay Brothers
Unmistaken Hands: Ex Voto F.H. (2016)
This short film is based on the work of the Uruguayan writer Felisberto Hernández, viewed by many as the father of magic realism in literature. In Unmistaken Hands, the Quay Brothers pay tribute to Hérnandez, fusing together a number of his stories.
Watch