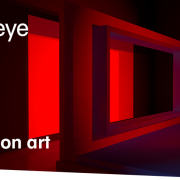 Kick off Vive le cinéma!
5 Feb 20.45
Six film critics made video essays accompanying the installations in the exhibition. They worked simultaneously with the artists, which raised interesting questions about the role of spectatorship. Somewhere between documentary and film journalism, free work and essayism, they are confronted with the question: how to reflect on a work in progress? Password for link: jubileum2021
More

Special Leopold Emmen
9 Feb 19.15
Artist duo Nanouk Leopold and Daan Emmen, under the name Leopold Emmen, create works for film, theater and spatial presentations both separately and jointly. Based on their joint and individual work on light and space, Leopold and Emmen discuss how light is used in their installation to go through the different emotional stages of a story.
More

Exhibition Vive le cinéma!
Spring 2021 (date to be announced)
For the jubilee exhibition Vive le cinéma!, Eye and the International Film Festival Rotterdam approached five major film directors from five continents, thereby reflecting the power and diversity of world cinema, which IFFR introduced. These filmmakers have been invited to make a work that exploits the potential of the three-dimensional exhibition space instead of the two-dimensional cinema screen.
More