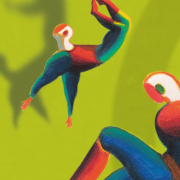 Venice VR Expanded
2 Sep – 12 Sep
This year, the Venice Film Festival’s Virtual Reality programme can be uniquely enjoyed at the twelve international cultural institutions to have joined its satellite venues network program. Eye is one of the venues to offer the festival’s special selection, from 2 through 12 September. With 40 productions from 24 countries, Venice VR Expanded 2020 provides a welcome alternative to regular festivals in these culturally straitened times of Corona.
More

Touki Bouki (Black Light)
3 Sep 19.15
The bold and energetic Touki Bouki was at the vanguard of the so-called ‘African New Wave’ of the 1970s and is one of the most important films to have come out of the African continent. The film won the International Critics Award at Cannes in 1973. Introduced by Mariët Bakker (founder of Africa in the Picture).
More

Selected Artist’s Moving Image
15 Sep 19.15
The new collection films are distributed by Eye and are also screened at international festivals. The selection highlights recent trends in the artist’s film and the short experimental film. Most of the filmmakers featured in the program will be present for a Q&A. Language: English.
More

Exhibition Trembling Landscapes
19 Sep – 3 Jan
Landscape is a charged notion in the Middle East. On the one hand, representations of landscape engage with a heady mix of national and natural borders, tussles over resources and territory, and (colonial) history. On the other hand, it is a rich source of identity, tradition and imagination. This autumn, Eye presents a group exhibition that explores landscape with some of the Arab world’s most prominent artists who work with film and video
More

Van De Jantjes tot We zijn er (Black Light)
30 Sep 20.30
Roelof Jan Minneboo and Ivan Barbosa host an evening on the representation of black people in Dutch films, based on clips ranging from the arrival of Sinterklaas in 1920 to Typhoon’s We zijn er (2016). Followed by the screening of Ivan Barbosa’s telefilm Cabo (2012).
More