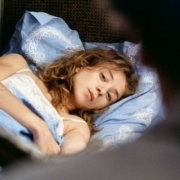 Spatializing Cinema – 3 July 19.00
Claire Atherton, artistic collaborator of Chantal Akerman, talks with film critic Dana Linssen about the relationship between film and installation in the work of Akerman.
More

Be Natural: The Untold Story of Alice Guy-Blaché – 5 July 16.00
Only film specialists are in the know: the early cinema had a remarkable share of women behind the camera. One of them was Alice Guy-Blaché, who was very successful with her New Jersey-based Solax production company. Jodie Foster talks about the virtually forgotten life story of this director, producer and film pioneer. Preceded by: Two Little Rangers (1912), a short film by Alice Guy-Blanché, with live piano accompaniment by Nora Mulder.
More

Restored & Unseen: Long Farewells – 6 July 19.00
A psychological drama about the strained relationship between a mother and her only son. The Soviet regime was to ban the subtle tale some twenty years later. Only in 1987 – in the years of glasnost – was the film allowed to be screened again. New digital restoration. Digital restoration by the Oleksander Dovzhenko National Center. With an introduction by Martine Bouw (Eye) in Dutch.
More

L.A. Tea Time – 14 July 19.15
What do you do as a young female filmmaker in Quebec if you’re not sure what direction to take? You go and ask multitalented director, artist and author Miranda July for advice. Light-hearted road movie highlights the importance of Chantal Akerman as guiding light for young directors. Introduced by art historian Marian Cousijn.
More

Restored & Unseen: Adoption – 20 July 19.00
The Hungarian Márta Mészáros was the first female director to win the Golden Bear of the Berlin Film Festival in 1975, for Adoption. Mészáros’ story about widow Kata who takes care of a 17-year-old girl has now been restored and can be seen in a program about the (forgotten) history of female filmmakers. Introduced by Leo van Hee, programmer at Eye.
More

My Life with Chantal – 28 July 19.15
Lecture by Eric de Kuyper, filmmaker, author and former deputy director of the Filmmuseum. He talks about his close collaboration with Chantal Akerman during projects such as La Captive (2000) and Demain on déménage (2004).
More