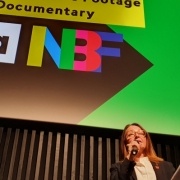 Monday night November 25th NBF (the Dutch Association of Film and Television Professionals) and IDFA organised a seminar for film- and television professionals about the use of archive footage in documentary film. The seminar was held at the Netherlands Film Academy.

We were honored to have Barbara Visser as host this evening. Barbara Visser is a renowned artist and filmmaker. In 2017 she was creative director of IDFA.

First up were Menno and Ellen from Getty Images. They showed us glimpses of the vast amounts of content they manage for partners such as BBC Motion Gallery, Discovery Channel, ITN and Sky News. Contemporary as well as archive footage from news, entertainment, nature and aerials to rare historical film.

They showed us how to navigate through this content. Getty preselects material into hundreds of categories and topics, and also prepares for upcoming events, anniversaries and possible news. Whether your production is factual, entertainment, drama or film, these selections will help you find what you are looking for.

Getty Images content and services can add value and enhance projects at each stage of the production lifecycle, from early research and development through to post-production and promotion. In recent years Getty has taken a more proactive role. Rather than ‘filling in the gaps’ at the end of the production cycle, Getty can be involved right from the start and help build stories from the ground up. And sometimes Getty even helps to shape the narrative.

For instance, when a client wanted to research the famous Muhammed Ali vs Joe Fraser boxing match, Getty researchers uncovered so much new material, they could support two more stories. One about Frank Sinatra who attended the event as photographer and one about a man in the audience who’s expensive fur coat caught the attention of the FBI. He turned out to be a mayor drug dealer.

The in-house Rights and Clearance expertise can help obtain legal green lights and Getty’s flexible access and licencing arrangements. What’s interesting to know is that for pitching, trailers and early edits for funding purposes you can use HD content for free. Should you be interested in getting to know the Getty Images content or if you want to talk further about starting up a project, contact Ellen Evers or Menno Strunk and discover how they can help your project, demystify archive and provide cost-effective licensing for you.

Pieter told us about the beautiful documentary They Call Me Babu directed by Sandra Beerends, which is selected in the new IDFA competition for creative use of archive and consists completely out of archive footage. He told and showed us a bit of the creative process of Sandra, as she tried to find the right narrative and tone of voice for the story. The story is about an Indonesian ‘babu’ (nanny) and her complex relationship with the little boy Jantje, his Dutch colonial family, Indonesia and the Netherlands.

Because the EYE Film Institute has the largest collection of Indonesian film footage, they started there. But they also involved the Netherlands Institute for Sound and Vision and a broadcaster. Sandra watched more than 500 films in total, and she selected over 1.000 shots from 195 different films for the documentary.

Most of these films were home movies, shot by fathers who filmed their families in weekends or holidays. Nanny’s were not the topic of these films, they moved in and out of the frame from the side, to bring something or attend to a child. But when you knew where to look, they were there! Leenke Ripmeester, archive specialist from EYE helped immensely in this project, she knew where to look.

EYE supplied so much footage that Pieter and the institute decided on a partnership. If Pieter would have to pay standard licencing fees for They Call me Babu, the footage would have cost more that 200.000 euro, which they didn’t have. But Pieter argues that it’s important to keep in mind the value, especially if you get something for free. The partnership means that EYE shares in the benefits. Moreover, the film is donated back to EYE institute. They regard it as a showcase for the Indonesian collection and they are free to use and show it however they please. A partnership that’s based on sharing, Pieter explained us.

The last presentation was by Juliette Jansen and Mick Bal from the Netherlands Institute for Sound and Vision. This institute in Hilversum is home to a very large and diverse media archive, the bulk of its content from the public radio and television broadcasters in the Netherlands. Juliette leads the team that initiates collaborations between Sound and Vision and all kinds of creatives; documentary filmmakers, artists, graphic designers, musicians in order to stimulate the re-use of the Sound and Vision collection.

Secondly we heard from Mick Bal, media manager archive research who handles research requests, licenses and clearing at Sound and Vision. He showed us Sound and Visions new catalogue system DAAN and how to navigate it.

He also introduced to the audience some interesting possibilities of open and public domain collections for filmmakers, such as Open Images (Open Beelden). This is a platform in collaboration with EYE. Furthermore, Sound and Vision has acquired or was donated the rights of several collections in their care, most notably the Polygoon-Profilti collection.

Hundreds of newsreels from this collection are public domain now and available for free, but filmmakers should always take into account the rules of Creative Commons licenses for open material. Mick showed us a clip from De getekende Hahn by Pim Zier, a documentary about a Dutch political illustrator made exclusively from public domain material.

Mick and Juliette stressed that Sound and Vision can play a integral role in projects that deal with archival content and that they are always eager to hear from film and documentary makers who want to work with the archive. So don’t hestitate to contact Mick Bal or Juliette Jansen. ‘Lets start a conversation’, Mick concluded his talk.

And the conversation certainly started after that, during the panel discussion and subsequent drinks, between archive professionals and filmmakers, researchers and producers.

The NBF wants to thank all participants and sponsors, especially Barbara Visser, for their contribution to this successful seminar. And many thanks to NBF-members and IDFA Industry guests for attending in such great numbers.