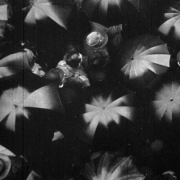 A programme on the intersection between film and other arts.

Transnatural – In the Age of Post-Drought | 1 Oct 19.15
Global warming, pollution, rising sea levels: the earth is not well and we humans are accountable. During this evening, artists address the theme of water. The programme includes artists’ films and performances by TeZ & Federico Murgia and Robertina Šebjanič.
More

George – The Story of George Maciunas and Fluxus | 8 Oct 20.00
Documentary on George Maciunas (1931-1978), the founder of Fluxus, a radical avant-garde art movement of the 20th century. Director Jeffrey Perkins and assistant director Liz Dautzenberg will also be offering a Fluxus Ping-Pong demonstration on the stairs of Eye’s Arena.
More

Nostalgia for the Absolute | 19 Oct 19.30
Multidisciplinary tribute to the work of Andrei Tarkovsky by his son, who presents a live remix of video projections, the Duo Gazanna who play pieces by Tarkovsky’s favourite composer Bach, and actor Thom Hoffman, reciting from Tarkovsky’s renowned book Sculpting in Time.
More

Sexual Unease | 22 Oct 19.15
A literary film evening on gender diversity in association with the periodical De Gids and SLAA. We look at stills and film clips based on an essay by writer and film journalist Basje Boer. In between various poets and writers offer their own view on gender and the awkwardness of demarcated sexual roles.
More

Talking Tarkovsky | 25 Oct 19.30
What does Andrei Tarkovsky’s work mean to a younger generation? Stefan Schoorl speaks with Young filmmakers Jasper Wolf, cinematographer, and Helena Hoogenkamp, writer, among others. With performances in the spirit of Tarkovsky.
More