The first film titles from the film program of InScience, the Dutch International Science Film Festival are known. Among others, The Farthest by Emer Reynolds, about NASA’s Voyager mission which celebrates its 40th anniversary, will be shown. In addition, Food Evolution (Scott Kennedy, 2016) and Pre-Crime (Matthias Heeder & Monnika Hielscher, 2017) will also have their Dutch première. A selection of the films will compete for the NTR Audience Award. The third edition will take place from 8 to 12 November in Nijmegen. Ticket sale starts on October 19th.

Film program
More than 45 films are featured at the festival. The competition program consists of the best science films that have appeared worldwide this year. The films in the film program range from feature films, shorts, to scientific documentaries with themes such as climate change, man and technology, food revolution and outer space. All films are complemented by extensive conversations involving scientists, filmmakers, and the audience. The full program will be announced on October 19th.

The Awards
A selection of the films is competing to be awarded in one or two categories. In addition to the NTR Audience Award, the films are reviewed by a student jury and compete for the Student Jury Award. The winning films will be announced on Sunday, November 12th at the Award show.

Talks, Interactive & more
In addition to the film program, there are lectures by leading scientists. Techno producer and scientist Max Cooper presents his scientific project Emergence and philosopher René ten Bos holds the central festival lecture, regarding the theme ‘No Facts, No Future’. The festival program is extended with a Virtual Reality program, on Saturday afternoon, and a comprehensive Interactive program with scientific experiments and Do-It-Yourself Labs. 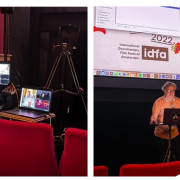