The selection for the 2011 Netherlands Production Platform (NPP) has been made and 20 brilliant, entertaining and thought-provoking projects, all ripe for co-production, are ready be presented to, and pored over by, some of international cinema’s most important and influential financiers, distributors, sales agents and co-producers.

Prizes
This year four prizes will be awarded to NPP projects.

The Kodak NPP Development Prize, with a value of €5000, is granted annually to the producer of a NPP project from one of the Benelux countries and is intended for investment within the project’s further development.

The Cineco Digital Post Production Award, also valued at €5000, is given to one of the presented Dutch projects and must be used to help finance the film’s post-production.

The Binger Award will be given to the most promising Dutch film plan and the prize will include a Binger coaching programme.

The jury will be announced soon.

And for the first time, a development prize will be awarded to an international NPP project. The Filmmore Innovation Cinema Prize (€5000) is intended to encourage European filmmakers to explore new and innovative ways of filmmaking and financing their stories.

Focus on Scandinavia
In 2011 the Holland Film Meeting will train the spotlight on Scandinavia, its filmmakers and the co-production potential of its production companies, funds and institutions, and of course its projects.

Leading lights from the Danish, Swedish, Finnish and Norwegian film institutes will be in attendance during the Holland Film Meeting to advise about their respective industries and to meet with the pitching producers.

On September 22 the Scandinavian theme will continue with a seminar involving leading Scandinavian production and finance professionals.

During the event entitled Innovation and new models for storytelling, production, distribution and financing in Scandinavia, Screen International editor Mike Goodridge and Split Screen’s Nick Roddick will lead a discussion to assess the success of recent theatrical and tv drama from the Nordic countries. | Read more

The Benelux Screenings programme is augmented by the best of recent production from Belgium and Luxembourg.

During the Holland Film Meeting the Digital Film Library is open all hours for buyers, festival directors, press and HFM guests who can watch English-language subtitles.

Complete programme will be announced next week.

WORKSHOPS, PANELS AND CASE STUDIES
On September 23 MEDIA Desk NL will host a panel on branded and sponsored content models. The session will look at the ins and outs of the creative, marketing and business aspects of branded content, as explained by experts in the field. | Read more

Also on 23 September will be the workshop discussion CoBrA – on authenticity and classical narrative structures. Moderated by Don Duyns, and organised by The Network for Scriptwriters, the workshop will comprise a conversation with scriptwriters from Belgium, Denmark and The Netherlands.

BINGER-SCREEN INTERNATIONAL INTERVIEW
During the Binger-Screen International Interview an accomplished industry figure will talk about his or her life and work, and share his or her views on contemporary filmmaking. This year’s guest will be the visionary and highly influential cinematographer Christopher Doyle (Hero, In the Mood for Love, 2046).

HOLLAND FILM MEETING WEBSITE
Check in regularly to the Holland Film Meeting website to check out news and updates about all aspects of the September event.

HOLLAND FILM MEETING BUSINESS DAILY
Every day during the Holland Film Meeting a page of industry news will be published in the 2011 festival daily newspaper. For further information contact Nick Cunningham at mail@nickcunningham.com or by mobile 44 7712 655006. 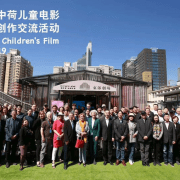